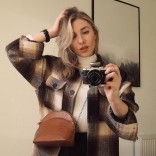 I'm a freelance writer, journalist and lifestyle blogger based in…

These Podcast Co-Hosts are On a Mission to Empower 20Somethings

This past week, we’ve seen an outpouring of action and solidarity across the world in support of #BlackLivesMatter, from powerful protests to social media movements. But now that we’ve all posted on Instagram, signed a petition or donated, what else can we do as a society to keep the momentum going?

Now more than ever, it’s extremely important to support small, Black-owned businesses in our community. C&S spoke with three inspiring Black women entrepreneurs in the fashion and lifestyle industry. Below, they share their experiences as business owners and advice for aspiring female entrepreneurs and BIPOC.

Jane Badu, Founder of We Are Nomads

When do you find time for your side hustle? Do you work at the weekend? evenings? both? It is quite the task to find enough hours in the day to write descriptions, edit photos, do social media, taxes etc..the list goes on. . . . . #designbusiness #creativewomen #womeninbusiness #sodomino #dailydecordose #myinteriorsquares #interiormilk #loveyourhabitat #bohemianliving #slowandsimpledays #simplethingsmadebeautiful #mybeautifulsimplicity #thesimpleeveryday #welltraveledhome #calledtobecreative #decor #interiordesign #smallbusiness #shopsmall

Jane Badu owns London-based online store and interior design studio We Are Nomads, which showcases global homeware collections, with a focus on African craft. With Scandinavian designs dominating both the market and our Instagram feeds, Badu explains the difficulty involved in trying to pivot public perception of the continent.

“For me it’s about trying to get in front of people the beauty and craft that goes into African design, and try to make a space for that in interiors. Most interior design magazines focus on European design, so it’s about trying to shine a light on the craft and talk less about the charity aspect of Africa.”

In addition to expanding and diversifying the African narrative, Badu also highlights her minority status in the interior design industry. “I’d like to change the public’s idea of what an interiors shop owner looks like. Many [interiors] businesses are owned by white women, so I suppose I’m trying to put myself out there as someone who is different to the norm, making a space for people like me.”

“Advice I’d give other Black female entrepreneurs is, if you have a passion, and if you believe in your cause, then just go for it. Don’t feel like you shouldn’t be there, or that people aren’t going to listen to your voice. Forge your own way and don’t wait for somebody to show you where to go. Be proud of who you are. If you have a passion you will find your audience.”

In a business world where Black women are largely underrepresented, for many Black female entrepreneurs, motivation and success are not just about building a presence but actually introducing one. Vancouver-based Irie Herbz Apothecary stocks health and cosmetic products which cater to women of colour. The owner, J Mitchell, explains that since setting up the company, she’s learned the importance of being the representation she wants to see.

“Instead of waiting for someone who looks like me to do what I’m doing, I have to be the one to set that trend. Not to say that I’m the first to do what I’m doing, but I have to be the one to inspire young people to want to become entrepreneurs, and to want to build wealth in their communities. Yes, there are Black businesses in Canada, but I think a lot of us think we can’t actually do it – it’s too much work, it’s too much labour, it’s too risky.”

As well as building personal growth, for Mitchell the idea of launching a successful business is about more than just the business owner. She reveals that much of the motivation behind starting her business was to inspire other women, particularly women of colour, to take a chance on themselves. “I think the important thing is to look towards the future and the impact that you have on the community when you become that trendsetter, when you become that innovator.”

Do you use Facebook groups? I've found them to be so helpful for advice on how to run an online shop to travel tips, so I started my own group 😀for people who love travel and design . Let's share travel tips and places we've discovered, places that you want to share but kind of want to keep secret, beautiful hotels or restaurants? Join the group and let's share travel tips . www.facebook.com/groups/wearenomadsgroup . . #traveltips #travellovers #traveltribe #traveller_stories #travelcommunity #theprettycities #culturetrip #vogueliving #passionpassport

Despite Irie Herbz Apothecary being very new, Mitchell’s customer base continues to grow, and Mitchell has enjoyed a steady incline of sales. Getting to this point hasn’t, however, been without its challenges. “It is so, so hard [to get your name out there]”, Mitchell explains. “I think there is a level of skepticism for Black businesses – are we going to be up to par with other businesses? Making myself be, or look, credible to potential customers is crucial to me. I want people to see this is a Black-owned business that they can trust, and feel proud to support.”

I Ran a Small Newspaper. Here’s What I Learned

Her advice for other female Black entrepreneurs? Look, listen, and do your research. “Years before starting my business was even a thought, I was researching. I would follow other Black-owned businesses, the majority female-owned. I was seeing what they were doing, how they were doing it, how they would organize their socials, and how they would market their products.”

Nuala Ferrington, Founder of Daughter of a Bohemian

Thank you….Thank you….Thank you….we are so grateful to all our new followers….and for all the lovely messages we have received….if we haven’t already responded…we will…💕 . . . As you may already know…we are donating £10 from the sale of each of our EMPRESS T shirts to charities devoted to the cause of making #blacklivesmatter Click on bio to buy 🙏🏽❤️ . . This image was taken by the wonderful @shellyvella who has championed our brand from day one…she is someone who always supports small businesses…and is a true @daughterofabohemian . . Model @nicole7jo 🙏🏽💕 📸 @shellyvella MUA @sam_suki

Although perceived as different throughout her childhood, Nuala Ferrington, owner of London-based slow fashion boutique Daughter of a Bohemian, decided to use this as an advantage for her business. The daughter of a Jamaican-German mother and White-British father, Ferrington explains that the racism she experienced was never extreme; rather, covert in nature.

“I was the girl with the fluffy hair”, she says. “People knew I was different but couldn’t quite identify why.” Even now, Ferrington still likes to blow dry her hair straight, a habit she attributes to her childhood desire to fit into her white, English surroundings.

While standing out wasn’t always a welcome part of Ferrington’s childhood, it’s become something of a trademark in her personal style as an adult. A champion of “dressy casual”, Ferrington pairs sequin jackets with Converse, or upcycled camo pants with lashings of bling. An advocate of “slow fashion”, Daughter of a Bohemian aims to create pieces that will stand the test of time, both in quality and in style.

Ferrington feels the challenges she’s faced as a Black business owner aren’t noticeably dissimilar compared with the majority of non-Black business owners in the industry – building brand awareness, for example. However, she credits her success to remaining authentic, sticking to her core values, and harnessing self-belief.

The effect George Floyd’s death has had on Black-owned businesses is something Ferrington admits she feels overwhelmed by. “I don’t know if my heritage was part of the reason I wasn’t ‘seen’ [as a brand] before”, Ferrington says, “but now it feels like a huge family has suddenly pulled together.”

“What we have to do now is continue to spread the world, talk and educate our children.”

Get notified about exclusive offers every week! 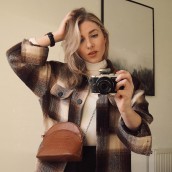 I'm a freelance writer, journalist and lifestyle blogger based in Vancouver.

This Founder Created a Confidence-Boosting Adventure Camp for Young Women

These Podcast Co-Hosts are On a Mission to Empower 20Somethings